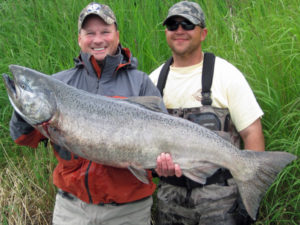 Headed to the Kenai Peninsula in search of a Guided Kasilof River King Salmon Fishing? Consider the Kasilof River a great option!  This fishery is the located 12 mile from Soldotna Alaska and is the sister river to the Kenai River.  It is also a drift boat only King Salmon fishery which means there are no motors allowed and pressure is way less than on the Kenai River, though popularity is growing every year. 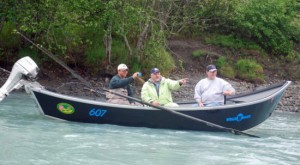 The Kasilof river has two distinctive runs of King Salmon.

The First run of fish start to show up around the middle of May and usually peaks by the middle of June.  These early run Kings will typically run between 20 and 30 pounds with an occasional fish weighing over 30 pounds.  During the early season the river is much lower than it is in late June and July.  It is still cold in the high country and the runoff isn’t as heavy yet.  This is the time to come if you are looking to hook a King Salmon on the fly.  As the water rises there is more glacier silt that clouds the river and less bank fishing opportunity to fly fish.

The second run of Kasilof River King Salmon start to show up near the end of June mixing in with the remainder of the first run fish and will keep coming in through the end of King salmon season.  July 31st is the last day that we are allowed to target these fish.  These fish tend to be quite a bit bigger than the first run of fish, averaging 30-40 pounds and with many fish caught every year reaching 50 pounds or larger.

The Kasilof river offers some great fishing opportunities, chances to see wildlife and is in a very peaceful setting.  Sit back, relax and wait for one of these large, hard fighting fish to latch onto your line.  If you are interested in a guided King Salmon fishing trip on the Kenai Peninsula I think that the Kasilof river is a great place to fish. 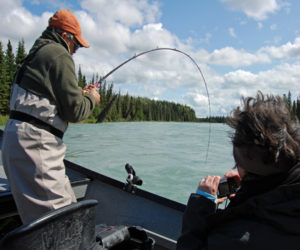